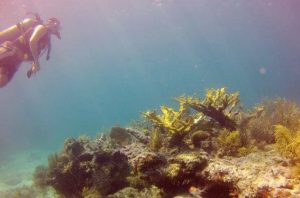 Reef building corals are highly dependent upon their relationship with endosymbiotic dinoflaggelate algae of the genus Symbiodinium. Symbiodinium translocate an enormous fraction of their photosynthetically derived metabolites to their hosts. However, this relationship may be lost through the process of coral “bleaching” which occurs as the result of high temperature and/or light. As sea surface temperatures are increasing at a rate unparalleled by any known historic climatic phenomenon and thermal stress induces the breakdown of this relationship. As a result, coral reefs around the world are in a state of rapid decline and may cease to exist unless coral and their microbial symbionts are able to increase their thermal tolerance. My primary research goal is to elucidate mechanisms underlying possible acclimation or adaptation of reef corals and their symbionts. I am most eager to explore the possibility that changes in the epigenetic states of corals and symbionts could facilitate an increase in the thermal threshold of this symbiosis.

Dan has a Bachelor’s degree in Molecular, Cellular, and Developmental Biology from the University of New Hampshire, where he conducted his senior thesis on the varieties of Superoxide Dismutase (SOD) in Symbiodinium.